Ever since I was a kid, I have always had a love affair with peanut butter. In fact, I think I ended up with a reputation of being addicted to stuff in my family. Thickly spread peanut butter on bread with jam and a cup of milo… mmm… oh my, how did the PB&J end up swimming in the milo? Oh well…

Of course, the worst part of growing up was discovering that my beloved creamy Skippy peanut butter contains hydrogenated oils which weren’t exactly good for me. Being a health conscious adult is sometimes a curse -_-;;

So with some healthy-eating prodding from sugarmama, I pondered on what to do… Leave peanut butter for something else? The problem with being in Malaysia is that the selection one gets is rather limited. For the longest time all the choices we had here were Skippy, Goobers or that horrible sugary peanut concoction that is Lady’s Choice (No offense, but the majority of Malaysian people tend to have a sweet tooth, I don’t, and unfortunately the peanut butter makers cater to them).

Anyway, while trying to decide who to partner with my favourite apple/rosehip jam, a trip to California happened. And it was there when I strayed from my love of many many years for some other nut butter whom I fell in love with on first taste.

You see, I walked into a local Trader Joe’s where I met and became acquainted with Almond Butter.

The good news was: almond butter is healthier than peanut butter providing the makers don’t mess around too much with it. The bad news? Long-distance relationships don’t tend to turn out well.

So once I had left California, I had a new dilemma: How to get ahold of almond butter in Malaysia.

Raiding the expat supermarkets in KL (Cold Storage, Mercanto, Village Grocers) resulted in me going home empty-handed. Desperate, I tried the health food stores, but the closest thing I got to that was sesame butter. Which was kinda nice, but not what I wanted. They’re kind of like those nice guys you see in romantic comedies, whose only purpose is to present an obstacle and prevent the girl from immediately uniting with her true wuv. Once the hero comes on the scene, she’s never going to settle for him and will secretly pine away until she reaches an epiphany and all that…

Similarly, I had one too. I came to the conclusion, because there was no way I was going to go crawling back to Skippy, if I wanted Almond Butter, I was going to have make my own supply myself.

Which brings us to the topic of today’s post:

Scouring the net will find you several different recipes for almond butter, and I deliberately picked the ones with the least additives. All I wanted in my almond butter was almonds, salt and maybe some sort of sweetener.

By the way, just so that we get this out of the way, to make almond butter, you need to have a food processor, unless you are crazy enough to want to try making it with a pestle and mortar as the Mayans (…or was it the Aztecs?) did.

Anyway… My first attempt wasn’t too bad. It tasted great, but was a grainy, drippy, oily mess. The reason? Freaking recipe said to put in sugar and a bit of sunflower oil, which I did.

Fortunately, the almond butter article over at the Fresh Loaf put me back on the right track. The truth is, the only ingredients you need to make almond butter is… roast almonds. Oh if you want to be luxurious, a bit of salt and sugar. In my case, I switched to honey.

Ok, for those of you reading this long post and wondering when I am going to get to the point of how to make almond butter from scratch, here is where you start paying attention:

What you will need:

1) Roasted almonds (Obviously. You will need as much as your jar can hold in grams) 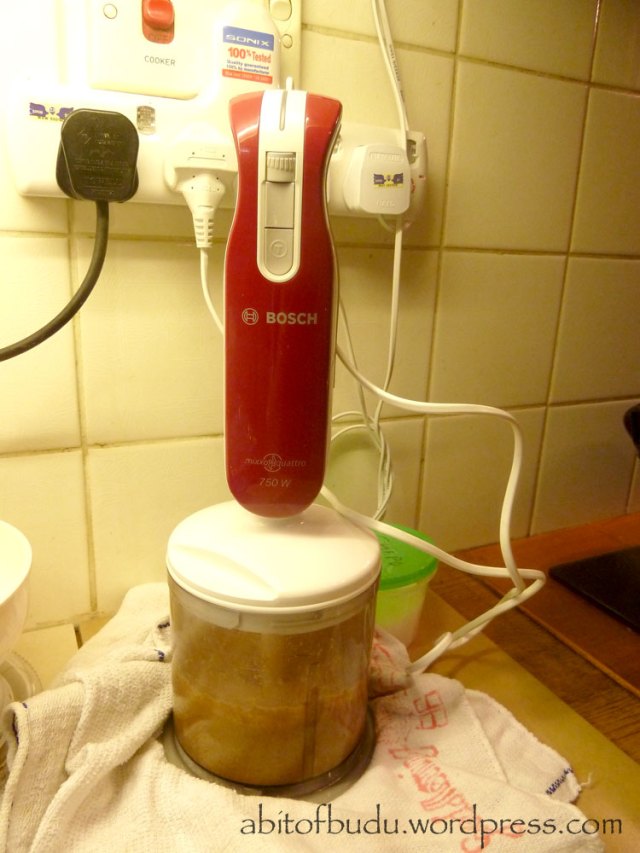 1) Food processor. I don’t have a full-sized food processor, so I used the chopper attachment that came with my Bosch immersion blender, which by the way, rocks!

Your almonds can be pre-roasted. I have noticed that they will be drier and produce less oil if they are pre-roasted though. Which can be a bit of a problem in making spreadable almond butter. Oil content seems to vary from types of almond to almond. So far Californian almonds seem to have more oil than any others I’ve tried.

In theory there is nothing fancy about making almond butter. You chuck them into your food processor and blitz.

In reality, there are a whole plethora of factors that determine whether the almond butter you made is creamy or not. Or if the person making the butter gives-up it halfway because they think they failed. Anyway, let’s start:

PHASE 1: Chuck your almonds into the blender and blend.

A word of caution about using non-industrial strength food processors. These things are liable to overheating, so monitor the temperature and don’t have them go at it for too long. I blitz for 10 -15 seconds or so before stopping to check progress. Sure my lovely Bosch has a temperature sensor that auto-powers down if the motor gets too hot, but I don’t like to depend on safety features. Failsafes can fail. 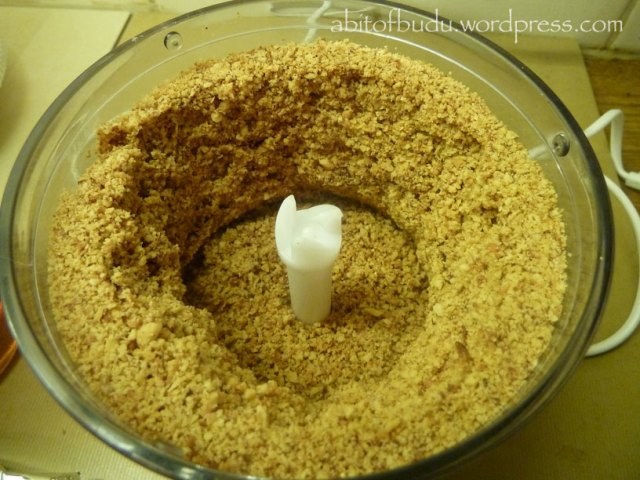 This is the point where most people who make almond butter will fail and give up, because it will seem like all that is happening is the coarse almond meal gets pushed up to the top of the processor and the blades are spinning around grinding nothing at the bottom. This is also the point where people will think of adding some oil to moisten the meal and so make the butter-making process easier. The truth is:

DO NOT ADD OIL! 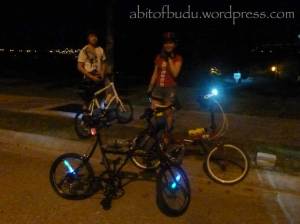 It backfires on you badly later. The reason for this is almonds contain plenty of oil already, but they just haven’t seeped out of the nut fragments yet. If you add oil now, you’re going to get a oily, soppy mess later. Trust me, I made that mistake and while the butter tasted great, the soaking through the bread part was a bit off-putting. Let’s not forget the whole reason we make our own butter is to avoid adding oils!

Instead, leave the almonds to cool and the oil to take its sweet time coming out, and go do something else. For example, I went cycling.

(That’s not me BTW, I’m the one taking the picture. Oh M, recognise the backlight?)

And then I came back, showered, and went back to making almond butter. By that time the hiding oil had decided to emerge and explore, only to be met by my deadly chopper blades. MUAHAHAA!

Don’t let the almonds escape! You might need to spoon the almond fragments so they fall back into the well and cover the blades.

Oh, you can add in the honey and salt here too. A little bit goes a long way, I put in about a half teaspoon of salt and a teaspoon of honey for about 400g of almonds, but it’s all according to your taste really.

And after you’ve added your salt and honey, start the processor:

There was much almondy carnage, with almond oil seeping everywhere and binding the previously irritatingly fluffy almond meal together, which made it much easier for my Bosch Blades of Doom to further pulverize them into a lovely almondy mess.

With the hard part over, we just keep on blending until the almond turns creamy and spreadable. Make sure to watch your processor motor so it doesn’t overheat. Pause and let it cool down if necessary. 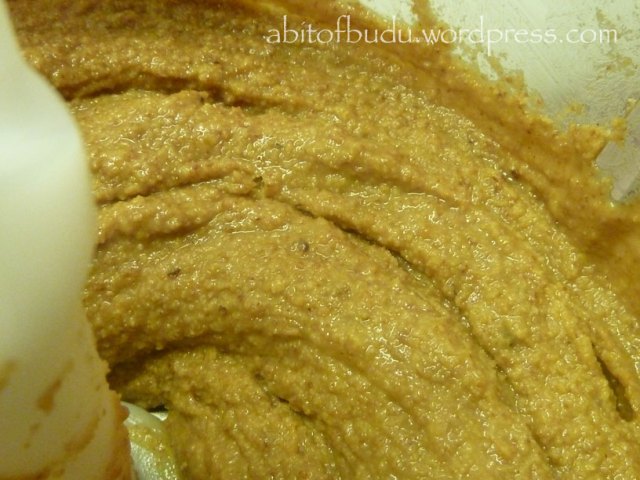 The longer you blend, the smoother it gets, but it can get really oily if you overblend, so watch out!

When satisfied with the taste and texture, spoon out into your sterilised jar. 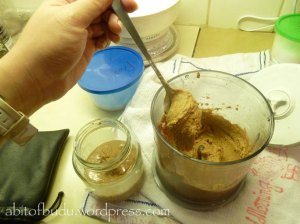 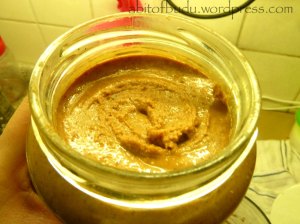 You can actually store the almond butter unrefrigerated for a few months, but if you’re not like me and it lasts longer than that, keep it in the fridge because we’re in Malaysia and it’s hot and humid and nut butters CAN go rancid over long periods.

Papa Salvatore enjoying the almond butter, which cost me less than RM10 to make for a 400g jar. Eat your heart out, Skippy! I’ve left you for someone better and I’m stronger on my own now and don’t need you anymoooore!